New Year resolution - to get fitter? Dance with the Buttercross Belles

Come along on Thursday 7th & 14th January 2016, 8-10 pm to give Morris dancing a try with The Buttercross Belles, when we will be practising stepping and learning a new dance.

Get fit, make new friends, Morris dance, come and give it a try!:)

Its been a busy weekend for the Buttercross Belles.

We had a fantastic Mayday with the local children from Otley, joining us at the Maypole.

..and then Sunday was spent at theOtley Street Fair / Tour de Yorkshre 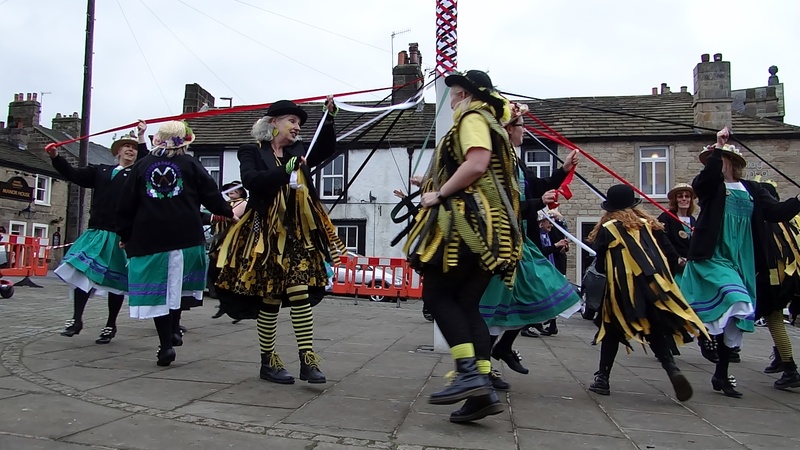 The Buttercross Belles celebrated Mayday dancing traditional Maypole dances around the Maypole in Otley. A big thank you goes to Anita from Wayzgoose who kindly called the maypole dances, and to Flash Company who joined us for the evening. We had a good number of local school children and their parents and even Otley local MP, Greg Milholland came out to watch.

A lovely start to summer.

So the new season is upon us, and from a winter of practices, and learning a new dance we are now ready!

So far we have had a lovely dance out at fountains abbey, where our lovely new dancer, Jaci showed um how to do it and yesterday we enjoyed a trip to Harrogate and Knaresborough to dance at Betty Luptons Day of dance. It was a very enjoyable with Betty's, Flag and bone, and Hornbeam Molly. We have even had a morris wedding!

It has been a good start to the season, and with a trip to Lille in May...it can only get better!

On Thursday 29th September, we will be holding an open session for anyone to come along and have a go at traditional North West Morris Dancing.

Whether you are an experienced dancer or complete beginner, we would love to see everyone there.

We will meet at 7.30pm at St Joseph's School in Otley.

If you are a musician looking to join a group then you would also be very welcome to come along.

All you need are your dancing feet.

On 27th July 2011 we were invited to the ‘Folklore Days’ dance festival in Prague. We set off for a nice afternoon flight and arrived in Prague just in time for some well needed dinner and a sample of Czech beer. 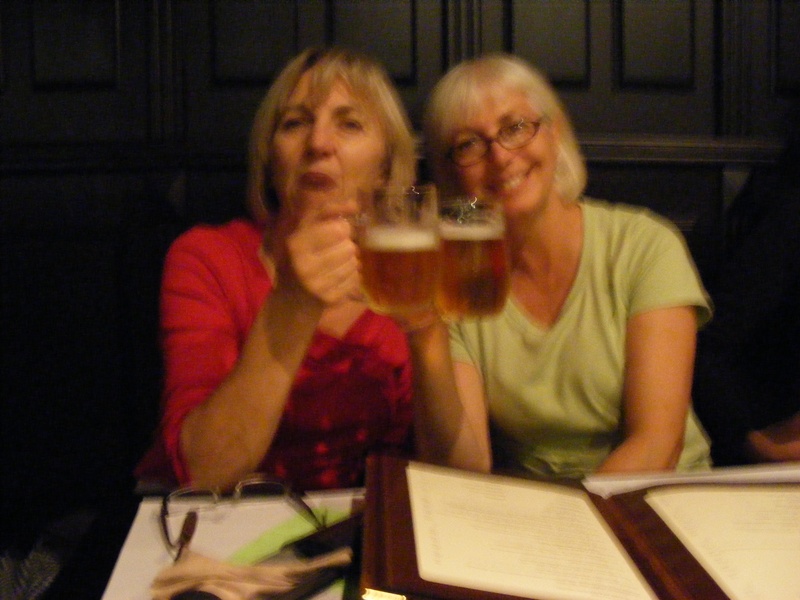 The next day we decided that we would dance on ‘wenceslas square’ in the centre of Prague as we did not have any scheduled dancing to do on that day. We entertained crowds of tourists who all enjoyed the dancing and a lot were very interested in where we were from and the different equipment that we dance with. 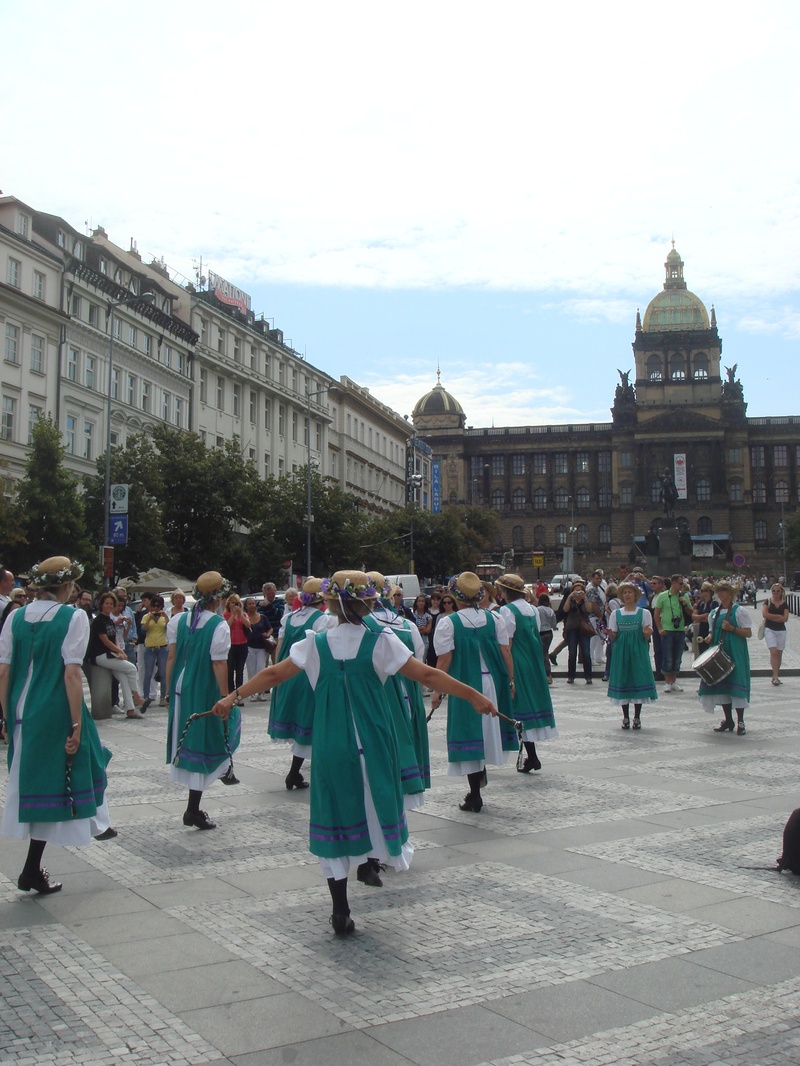 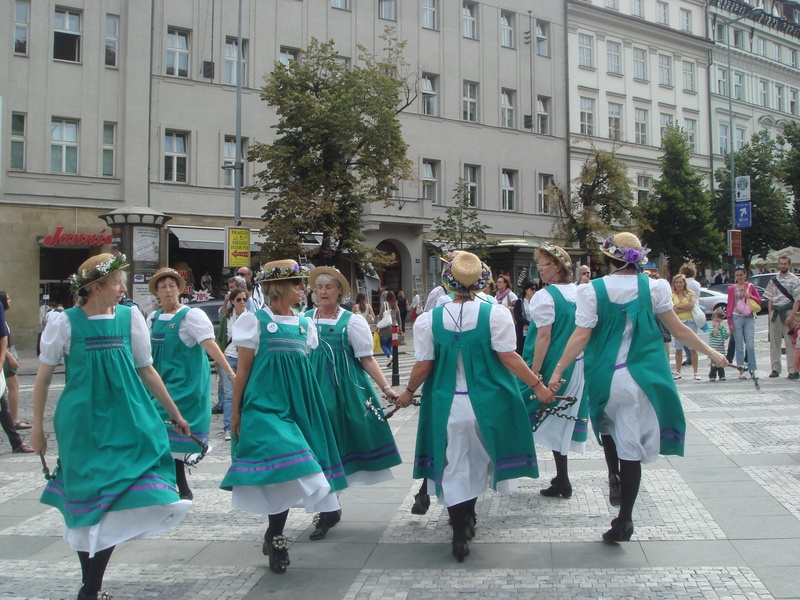 In the afternoon, we were met by our guide for the festival, Mikela who took us on a tour of her beautiful city. We were shown lots of landmarks around Prague including the ‘Charles Bridge’ and ‘Prague Castle’.

Some Belles enjoying a boat ride on the river. 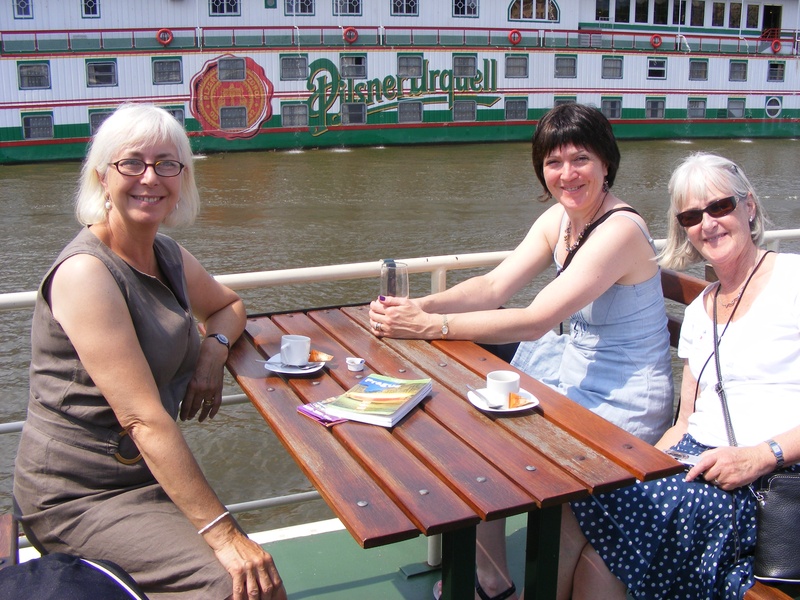 Today was our first of the stage appearances; we arrived at the stage in Old Town Square where the Austrian team were already performing their set. Their outfits were very extravagant and detailed in their Edwardian style.

After the Austrians had finished their dancing it was our turn, we began with ‘Portland Hill’ and continued through our repertoire to fill our 1/2 hour slot. We danced for a large crowd and were very well received by everyone in the audience. 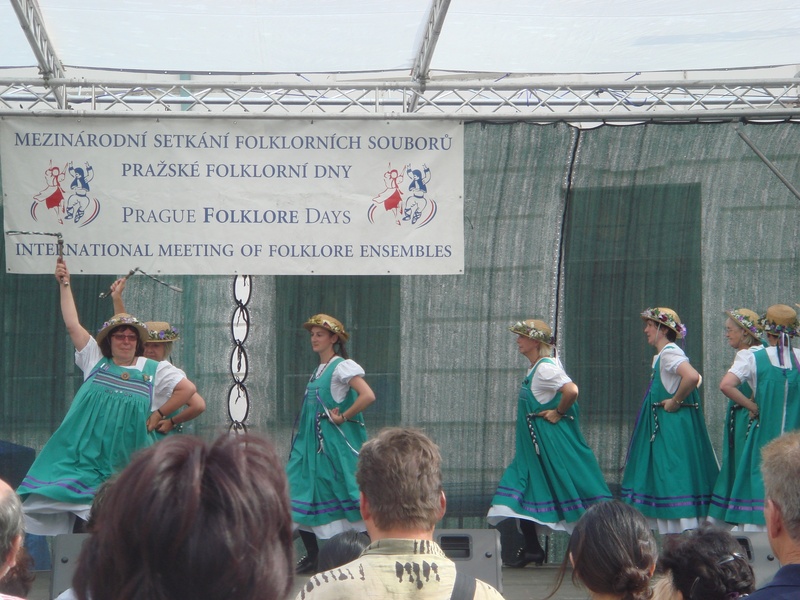 The second of our stage performances was at the bottom end of wenceslas square and was just as successful, despite the rain that we had to endure whilst waiting for the Czech Republic team to complete their set. Their dancing was quite similar to English rapper or sword dancing, they had long swords and danced holding each end of the sword in a circle. After this the team danced with their hats, swapping them and a dancer dropping out after each sequence so that there was just one dancer left by the end of the dance.

This dance spot also had a large crowd and we were very well appreciated by all.

Later in the afternoon, we were to dance on the main stage in ‘Old Town Square’. Each team were given a time slot to perform one dance, we stood for a while and watched the other teams before it was our turn. The very colourful teams were very good in their own styles from their countries.

When it came to our turn, we performed ‘Failsworth’, one of our more traditional North West style dances with very military like figures. This was taken very well by the audience and made you realise how many English tourists/onlookers were in the crowd and supporting us as their home team.

Unfortunately, due to the weather, the procession was cancelled so we did not have the experience of this.

In the evening, all the teams were gathered together for a mass meal. The meal was very tasty and the Czech beer was also very welcome after a long day of dancing!

After everyone had eaten, some of the teams decided to start performing traditional things from their countries. The Spanish men were chanting while the English Boarder team did a stick dance. Each team did a turn and it spontaneously became a mass of culture from all over the world. One of the Belles performed a solo dance called ‘Celebration’ which was taught by one dancer from Wakefield Morris in which each figure incorporates a different aspect of North West Morris. After this, another Belle sang ‘On Ilkley Moor Bar Tat’, a traditional Yorkshire chorus song which the other teams joined in to.

Later, the Spanish flamenco dancers got everyone up to dance with them and try out some flamenco dancing which was very enjoyable. 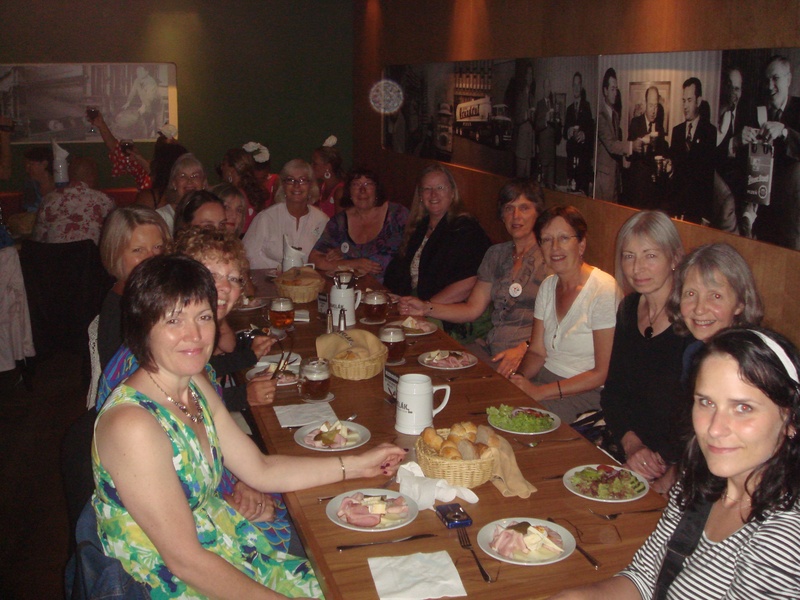 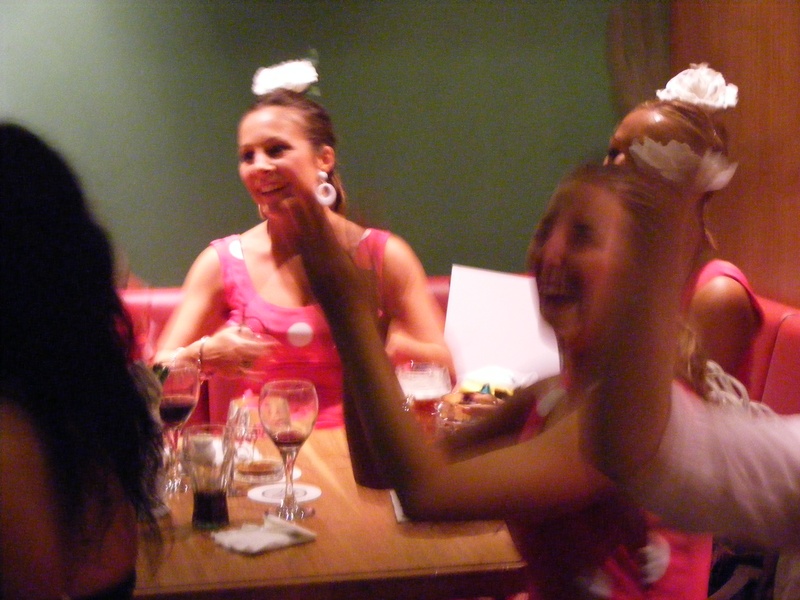 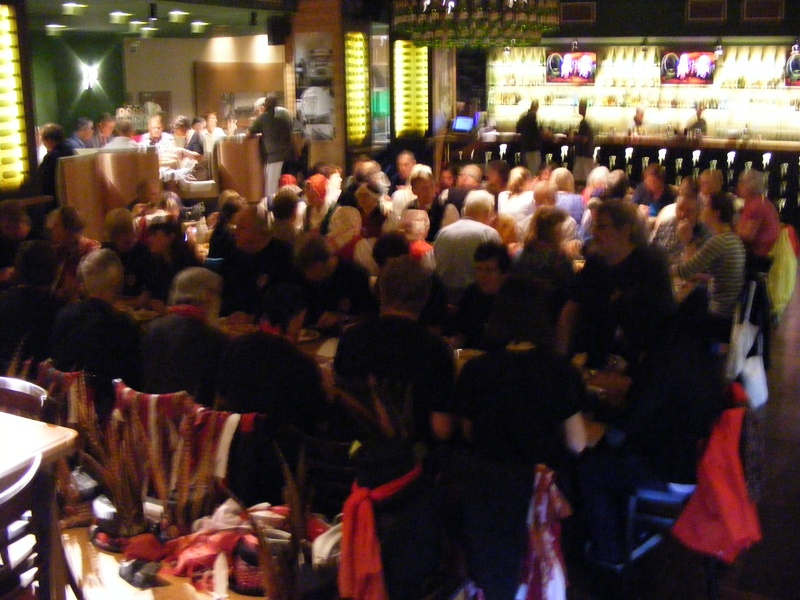 The last day of the trip, we were left to either have a well earned rest or have a last look round Prague at our leisure. Some of the Belles went on a tour of the all alleyways around Prague, this was very interesting as you followed the route of the guide book and it explained about all the little nooks and crannys in Prague.

Then it was time for one last trip to the fantastic cake shop where we bumped into some more Belles who has also gone for a last taste of the cakes before it was time for home.

On a lovely sunny afternoon in Ripon the BBs danced at the HeArts Festival held at the Workhouse Museum.  During the intervals we were able to view some of the traditional craft activities as they were demonstrated; these included coracle making, wood turning and rag rugging.  Afterwards we were all invited to Gill's Mum's home where Nell had prepared delicious cakes and tea for us - the calories lost dancing were soon replaced.......... May Day at dawn

Lesley writes: "3:15 a.m. – kit check – thermals, extra vest, extra tee-shirt, fleece, gilet, scarf, gloves, flask of tea (perhaps containing something extra) and of course – the torch ! Why? – because it is that time of year again. The 1st of May when the Buttercross Belles (or at least those not quick witted enough to claim a previous commitment) assemble in the dark at the top of the Chevin to welcome in the Mayday. We were joined by Briggate and Wayzgoose and what seemed to be hoards of photographers.

I like to imagine the tourists flying over us on their way to land at the airport. What do they make of this spectacle of flower bedecked straw bonnets, black caps and white and black faces topped with feathers? Goodness knows!

Was it worth it? Well let’s just say that Julie makes a terrific bacon sandwich and mug of tea – so for that alone –yes! "

It was sunny when we got to Oxford and we danced with lot's of teams. On the Saturday we took part in a mass dance at the castle with all the other teams there on that day. We went to Pizza Express and some people then went to the celidh. Everyone who had been good got a small chocolate egg from Susan, but because I'd been EXTRA good I got a big one with my name on it. It was magic! Everyone who went had a brilliant time and we can't wait to go back next year. 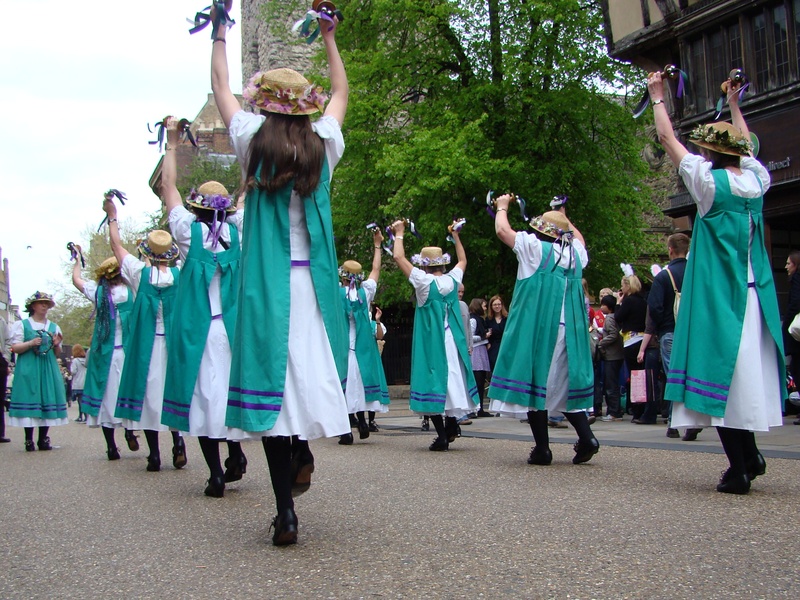 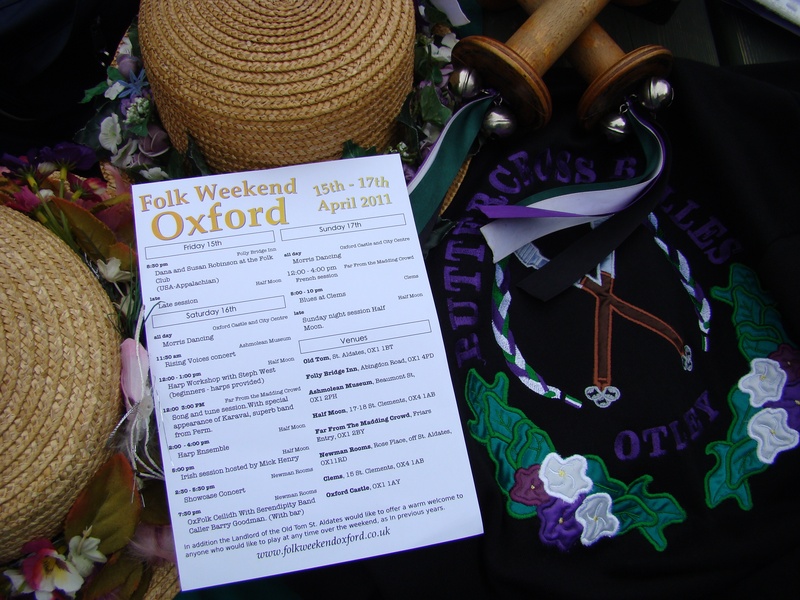 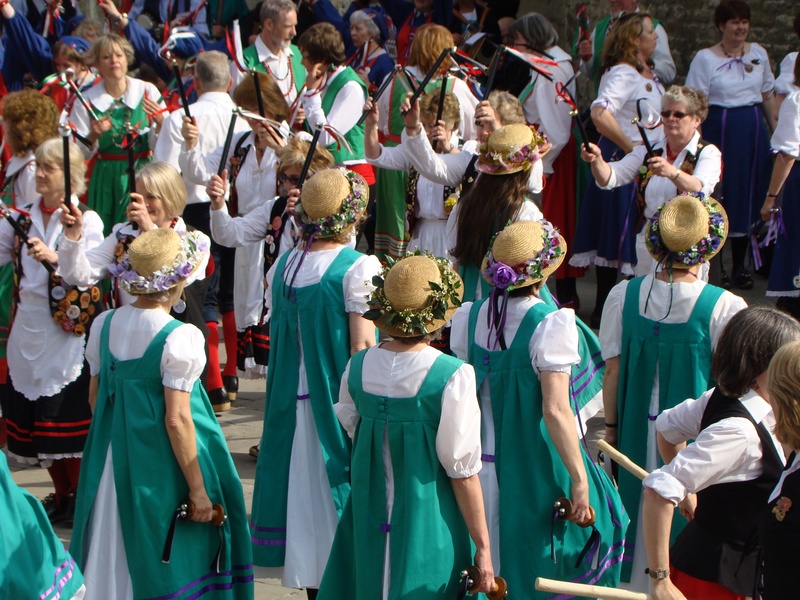 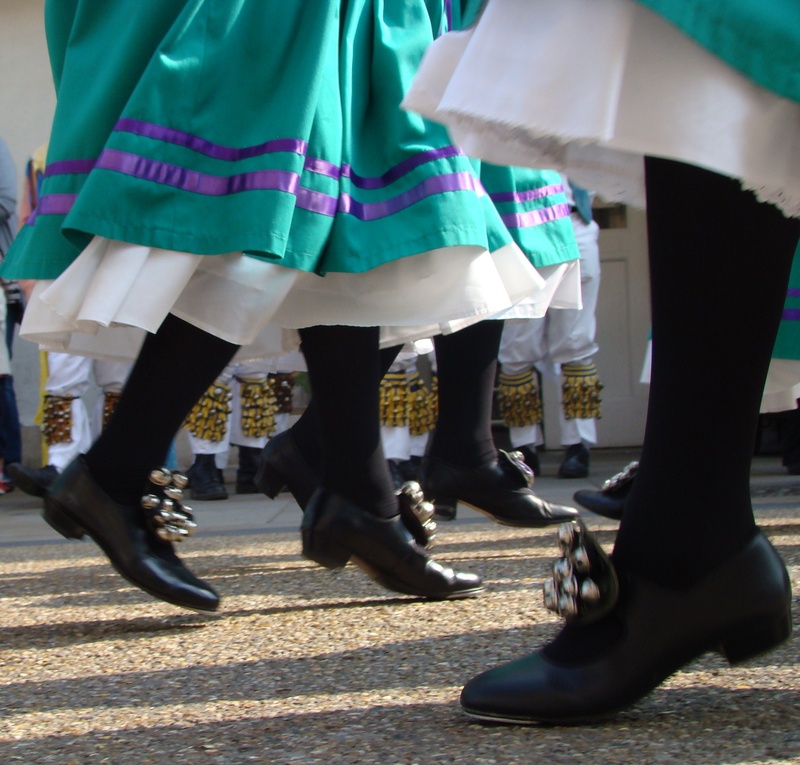 We were made very welcome at the Women's Institute meeting in the beautiful village of Hampswaite on Monday evening.  We performed a selection of dances for the group and inbetween each one our Squire, Susan, gave a potted history of Morris Dancing and explained the different Morris traditions and styles of dancing.  The session concluded with some of the women joining the BBs for Greenham - and very accomplished they were!